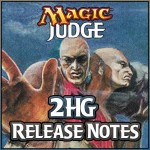 The majority of cards work as you’d expect in 2HG but there are some quirks, often involving the combat phase or life total changes. Those cards are explained in these notes. If you’re playing a 2HG prerelease you should also check out the 2HG Hidden Gems that highlights which cards to look out for! Kaladesh has its own Release Notes. If you're judging a 2HG prerelease I'd advice mentioning in your opening announcements to prevent disappointments during games. It looks like it's 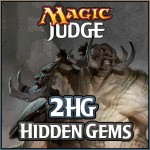 This guide shows which Aether Revolt cards get better in Two-Headed Giant and which get worse. If you’re playing in a 2HG prerelease these are the cards to pay special attention to! Kaladesh has its own Hidden Gems. If you want to know more about the rules interactions, check out the 2HG Release Notes for Aether Revolt. For the short version you can skip to the TOP 15 list at the end. GENERAL Prerelease power level: Normal 2HG sealed uses 8 boosters. Prerelease 2HG uses