Magic is a game translated in several languages, and tournaments are conducted in lots of countries around the globe. As the game accomodates the players by being translated, language shouldn’t be a barrier for judges when learning the Comprehensive Rules and DCI Policy documents.

Until 2004, Wizards had a group of judges for each language to translate the rules and tests, but that project was abandoned.

– Translate and update the Magic Comprehensive Rules, Magic Tournament Rules, Magic Infraction Procedure Guide,  and Judging at Regular REL; other documents and communication, as needed.
– Translate into Spanish, Portuguese, Italian, German, French, Russian, Japanese, Chinese Simplified, Korean (and possibly other languages, like Greek and Polish).
– Create and mantain a network of judges willing and able to translate documents into the languages Magic is already translated, for the documents mentioned here and for other projects and documents.
– Create and mantain a website to post the translated documents and other relevant documentation:  http://blogs.magicjudges.org/translatedrules/.
– Interact with Wizards’ Localization Department to have and use the proper Magic Glossary and Terms.

General Coordinator (GC):
• Receives from Wizards the updated documents, (preferably with tracked changes).
• Forwards them to Language Coordinators (LCs).
• Mantain communication with LCs to check the status of each language.
• Generates reports of project status for the JudgeApps Forum.
• Receives applications to help with the project and redirects them to the appropiate LC.
• Receives solicitation of new translations from the DCI or other projects, and redirects them to the appropiate LC.
• Posts translated documents on designated website.
• Administrates the rules website and blog.

Website Contact:
• Receives from GC the link to the updated rules document and creates in the rules website an article in his language linking to that document.
• Creates in the rules website articles linking to FAQ announcements, or creates articles with card errata for his language.
• Some languages are already translating JudgeApps Forum announcements, and that translator also posts the translations to the website.

Translator:
• Receives document from LC.
• Translates and forwards translated document to LC.
• Edit, if necessary, translations made by another translator. 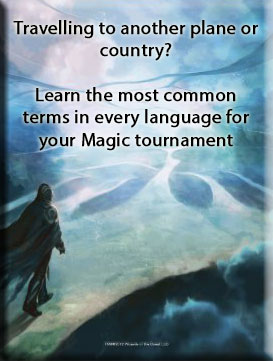