Through my first article, we have prepared our team as best we can. The organizer, the Head Judge, and you have created a detailed schedule. You think you have enough resources and the organizer has told you how many standby judges can be called upon each day. Your judges know what they are getting into, and they have been briefed on the tasks they will be expected to do throughout the day. Now comes the big question(s): how do you get through the day, and what can you do to prepare?

We will need many things to create an overview of the organized chaos that is public events. Some things can be done digitally (see my article on Trello for digital preparation) or with paper printouts. As we are not yet ready for fully digital public event management, I will share my templates and printouts I use to achieve the same goals. As with the schedule, there is no one way to do it right: this is just how I do it and you are welcome to either use it or find your own way and your own tools (or perhaps find someone else to share their take on public event management).

I personally want to know these things at all times:

To answer this, I like to print out a few copies of the venue layout as big as possible (A3 should be enough though I have never used a bigger board to do it, which could be a worthwhile experiment). Then I like to use markers to show where my events and my judges are situated. Having multiple copies enables me to create a new one if the original is too much of a mess or if it gets outdated. If you only have Letter or A4 paper available, most software now allows you to print over multiple pages. Taping the map together will be a little messy but should be as functional as using a bigger paper format.  At the beginning of the day, it’s very important to have a judge take the plan and add table numbers to it. Even if the plan already has table numbers, making sure they haven’t changed from the original plan is crucial. Basing your tournament placement on erroneous numbers is asking for trouble.

I do not have to point out just how important it is to know where your judges are. Even if a judge is the head judge of a tournament, it doesn’t mean their shift starts 15 minutes before their event starts. Rather, they will be on other tournaments in the meantime to help with setup or to relieve someone for a break, etc. This creates some volatility and uncertainty in the location of judges during the day, so keeping track of their movements will help you when the ODE lead comes to you for additional resources or to decide where to send judges when a group starts their shift. I used to do this tracking with Trello but found it too difficult to share if the people around you are not as digitally equipped as you are. It was pretty obvious that the only thing I needed to do was to revert the Trello board back to its original form used in agile programming: use a board or a piece of paper and some Post-It stickers. If the printout of the venue is big enough, you can also use the room plan to do it, allowing you to point people to the correct location if they are looking for a judge. The exclamation point is where I am. 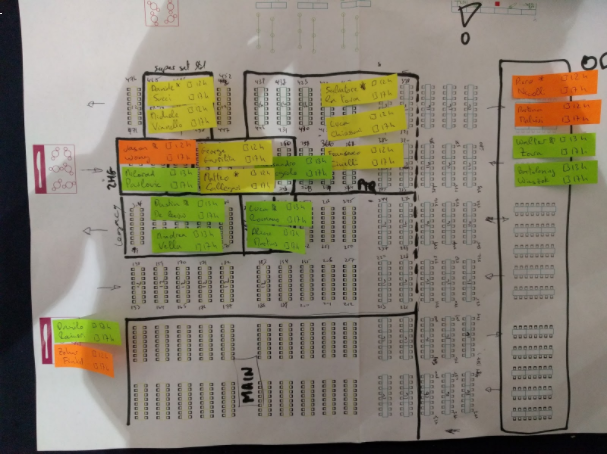 How far along are my events?

Asking the Head Judges to enter round times on a sheet of paper has not worked out very well historically: most forget to do it and reminding them each round is not effective. Instead, ask the scorekeepers to fill out the information you need in an excel sheet shared between all scorekeepers, the kickstarter team lead, and you. To make it as easy to use as possible, a button was implemented in the excel tool (linked at the bottom) to add a timestamp to a cell. The scorekeeper thus doesn’t have to think about the time but only has to press a button when they print the pairings for the next round. While we are at it, it might also be a good idea to ask them to fill out the other key information for each event:

, was expanded with the round times and the timestamp button by Lamberto Franco

and I. The tool automatically updates the last table when the scorekeeper updates the number of active players, which is also very helpful when determining where to place the next event, especially if space is scarce. The spreadsheet quickly gives you an overview of which tables are free, and, combined with the map, (and some physical exploration of the space on your part) this tool is all you need to get an overview of available space and the state of each tournament.

Did they have a break and is their shift due soon?

As with the Trello board, I use a different color of Post-It to identify the different shifts. I think no more than 4 colors are necessary. At the beginning of the day, I will write each judge’s name on a Post-It and create 2 empty checkboxes. The Post-Its can be used to map where judges are. If I send a judge on break, I will place their Post-It in the “Break” area and check the appropriate box. When they come back, I’ll again assign them to a tournament. Coupled with the floor plan, these Post-Its give me an easy global view of all judges in the event, which of them already had their break and who still needs one. The Post-It sheet also shows who is working past their official end-of-shift time. 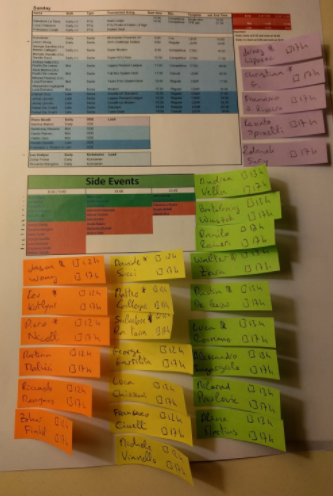 I used these tools in GP Turin and I have to say it went very well. Of course, everything can be improved and I’d like to talk about what changed during the Grand Prix on the fly and what I would do differently next time:

The sheet I gave to each Head Judge was also used to record the time of each round and didn’t have the responsibilities explicitly written out. This didn’t really work out as most Head Judges forgot to write the time on the sheet. After Turin, I will ask the scorekeeper to use the template with a timestamp button. It will be clearer and will provide a shared view for the GP Head Judge as well as the organizer if they need it.

Using the map as a Trello board

Having a big enough map allowed me to put both the organisational and geographical judge locations in one place, instead of splitting up tournament assignments and venue layout between different documents. Originally, the plan was to represent each tournament on paper and then assign judges to the tournaments. Using the map to organize judges and tournaments makes all the information readily available.

Communicating the responsibility of each role clearly

Here’s an example for a regular constructed event:

The kickstarter team is responsible for:

The Head Judge is responsible for:

I did not accurately predict how Friday would go. Friday is the most dynamic day of the weekend with two on-demand event structures running in parallel, coupled with normal scheduled events. We have on-demand events starting as soon as there are 8 players and lasting 3 rounds. Grand Prix Trials start as soon as 32 have been assembled and last 5 rounds. Both types have completely different dynamics but need enough space to grow organically to minimize the number of dedicated judges needed. The placement of all 3 tournament types is very important and needs to be well thought-out before the day starts.

Basically,you need ODEs as near to the stage as possible because the turnaround of ODEs is the fastest of all 3 event types. You also need to leave enough space to be able to grow organically if ODEs become busy. Next come the GP Trials who normally need more space but take longer to finish. It helps if there is a “Top 8 Area” and players are told at the beginning of the Top 16 where to find it. We want the space easily accessible with the Top 8 area in front of the station as it will be busy most of the time (For example, you could use the space from the first GPT as the Top 8 area.). Lastly, we place the scheduled events as far away as possible because they are very static and the judges responsible for them will only need to come to the station every hour to hand in results and get what they need to start the next round.

Finally, for those who have come this far, I’ve put all links used in this article together so that you don’t have to search for them if you want to use them:

Success in the judge program is based on the work of others. At each event, we learn and grow better at what we love doing. I am no exception and would like to repeat my thanks to the people who helped create the tools I presented in this article. In particular, I would like to thank:

for allowing me to use his event recap and schedule template I based my work on.
Khanh Le Thien

for his communication email that I based mine on.
Lamberto Franco

for adding the timestamp functionality to the scorekeeper sheet.

You are all great and I love you all!