I’ve read a few articles about managing Public Events at Grands Prix, but none were written with the idea of giving tools and templates to build upon and to reduce the workload of the next Public Events Manager (PEM). While I prepared for an event, I wanted to document the process and share both the files, and the methodology, so that they can be used by others when needed.

The Beginning: The 3 Unknowns
When approaching the management of Public Events, there are three things you need to know before you can even begin preparation:

You can’t prepare adequately if you have no idea what kind of tournaments you will have to staff or, even more importantly, if you are responsible for actually creating the staff schedule for the judges (some organizers prefer to do it themselves and have you implement what they scheduled).

We are going to talk about what to do when you have 3 unrelated lists: a list of tournaments, a list of judges and the names of the organizers and Head Judges, as I believe it is more time consuming and difficult to organize things into a useful, cohesive structure.

If you get handed out the whole schedule already formulated, you can use the same methods to check if it meets your standards. Checking the feasibility of the schedule handed to you is imperative as you will be responsible for implementing it — the organizer will be more than grateful if you point out problems a few weeks before the event instead of in the middle of the day.

Distributing Resources Fairly
A few weeks before the event, you will have received the list of tournaments (ideally — but not necessarily — with expected player numbers), a list of judges available for the day and, if you are lucky, a floor plan from the organizer. You will now need to contact the Head Judge and work on distribution of judges and space. Normally, the Head Judge will have a requests form online for the judges to enter what their preferences are for this event, The requests are very diverse (ranging from “I want to be in this team”, “I want to judge with XXX” or “Please put me in the X shift”) and the Head Judge and yourself will have to find out where to put which judge, taking the wishes of the judges into account but more importantly, the needs of both sides of the event.

You need to understand that both you and the Head Judge have the same goal for your respective areas (Main Event and Public Events). Both frank communication with the Head Judge — and how to optimally distribute your experienced judges — are essential for the smooth running of the event. L3s will be needed both for ME and PE, either in mentoring positions or positions where they can utilize their experience. Experienced L2s will be needed to fill in key roles and to be available in case some of the L2s find themselves out of their depth (through no fault of their own). If one side is stacked with all the experienced judges (who may end up bored out of their minds because of how awesome the staff is), the other side will have to struggle with judges that are out of their depth, because they were given tasks that were too much for them and no mentor to act as a safety net.

If the schedule is handed out to you by the organizer, it is imperative that you think about each assignment and if their role has the right fit. Most organizers want their event to run as smoothly as possible and they might not have considered all aspects while doing the schedule (one of the reasons you have this role, actually). Discussing with them who you think might be a better fit will help everyone involved.

How many judges do I need?
Before you begin distributing resources, you should know how many judges you will need. This is even more important if you want to ask the organizer for additional judges. You can’t really tell them that you ‘think you will need more’. Most organizers will want to know why, exactly, you think you will. They will likely want to have a plan showing what you intend to do with the additional resources. Having a resource plan will make a difficult conversation easier.

Personally, I like to create a tournament/time diagram. Using the tournament as a base, I try to input how many judges I will need for which tournaments and estimate how long they will run.

This is also the moment I try to create the different teams I will need:

gave me was to ask the organizer how many players he thinks those scheduled judges should cover and the rough expected attendance of each tournament. You can then easily add this into the sheet (by adding more judges based on the estimated numbers the organizer gave you).

The end result, for me, looks like this (and thanks to Matteo Callegari

for providing a template with much better formatting than I had):

Using this template, I can see:

This will result in a rough schedule that looks like this:

Detailed Schedule
Now you know how many judges you will need! With the rough schedule, you can look at the judge requests, and discuss with the Head Judge where judges will be assigned. When you know the pool of judges you will have for the day, you can start filling out the detailed schedule and assign judges to shifts. Everyone has a different take on the detailed schedule and no real standard has been defined.

I personally prefer to have a more flexible schedule with the Head Judge of each event defined (and maybe a mentor or two when needed). To begin with, I create the different teams I will have (here 4: PTQ, Swiss, ODE and Kickstarter) and fill out when I need the assigned judge to be on-site for preparation. Some tournaments take less time than others, especially if you have a kickstarter team to help them with product, space and paper preparation. Ultimately, the Head Judge is responsible for their tournament and will need to prepare for it accordingly.

If I have to create the schedule myself, I use the available staff, the judge requests, and my personal knowledge of the judges and start assigning Head Judges and mentors to the detailed schedule.

This is roughly how an example schedule for Sunday looks: 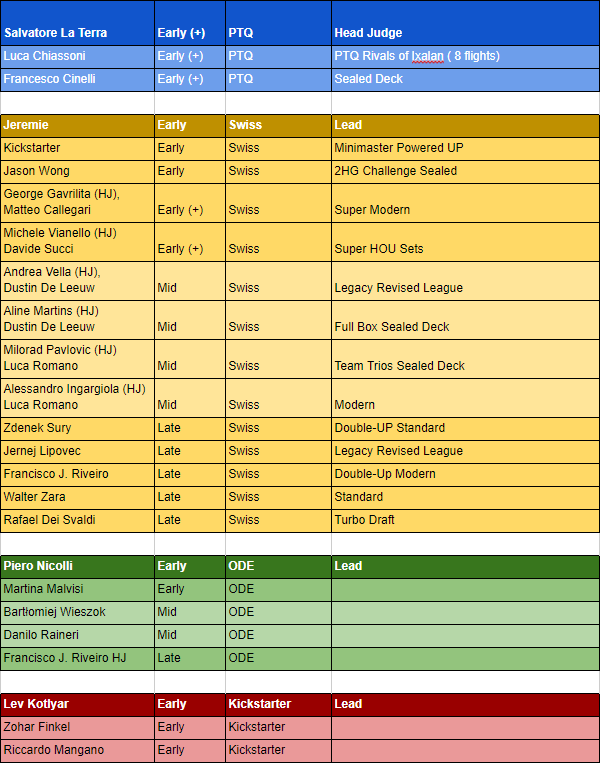 Combining both the rough and the detailed schedules will result in a shift schedule that can be published alongside the detailed one. Not every judge has to be on the detailed schedule. As I mentioned earlier, I prefer to have only Head Judges and mentors as fixed assignments, even more so when I don’t get the expected number of players for each tournament and don’t want to over- or under-staff a tournament. 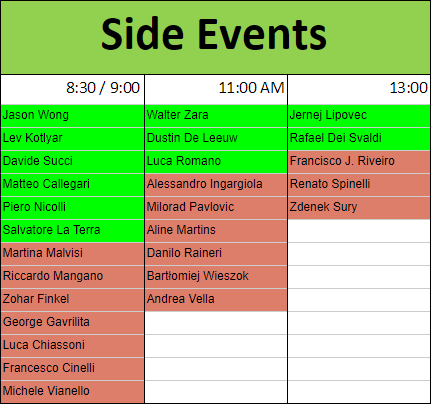 Judge Communication
Public Events can be quite hectic and a lot of things have to work alongside each other. The process of starting an event can be quite complicated with different groups of people each having responsibilities. To minimize misunderstanding and tensions, it is important to communicate the plan you want to implement to all judges and give them time to send you questions and comments. Using Khanh Le Thien

’s email as a base, I tried to create a communication template explaining the processes used and giving an outline on what each judge would have to do during the day.

One important point to highlight in the communication template is the tournament recap each that judge receives before their event to understand what they have to do, and the distribution of responsibilities. Each Head Judge gets an appropriate tournament form (thanks again to Matteo Callegari

) and should read through it. As they should arrive 15-20 minutes before their tournaments, it might be a good idea to let them use the first five minutes to double check the sheet, even if you have sent it via email beforehand. Some judges don’t have time, or miss emails, attachments, and links — this document is too important to leave to chance. On each tournament recap sheet, the kickstarter team will fill out where the tournament will be located and how many players it has. This will allow the Head Judge to be able to better prepare for their tournament and maybe minimize problems between the kickstarter team and the Head Judge.

Here is an example for a Competitive REL, limited tournament with a Top 8. Don’t worry, at the end of the PEM series, I will have links to all templates.

Tune in next time for more about preparing management tools!
– Jeremie