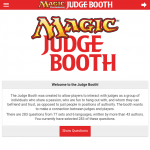 Improving your event with Magic Rules Trivia The Judge booth is a project that tries to approach players who have only a vague idea of what a judge does and how tricky Magic rules can be by presenting them with increasingly more difficult scenarios and specific questions, to which they can then give an answer. It has been used a Grand Prixs around Europe and smaller events before to great success, usually rewarding correct answers with small prizes like random foils and getting the players interested

Hello everyone! I am an L1 judge from the Czech Republic. In this blog post, I would like to share with you my recent experience with running a Judge Booth. I hope that it may inspire you to run one on your own. I have always been intrigued by the rules part of judging and teaching players the delicacy of rules. Another major interest is in the diplomacy between the judge and player communities. So, when I discovered it was possible to run my own judge booth, I immediately decided I had to

This report has been submitted by after he organized a judge booth at his local PTQ. If you also would like to organize such a judge booth at one of your local events, do not hesitate to contact us for assistance and material! We had a PTQ in Ljubljana, Slovenia on October 5th where 115 players gathered to compete for an invite to PT in Valencia. Since it was a big tournament we expected many people from other regions of Slovenian will come, where we don't have any active judge and I thought Judge

The following report from GP Utrecht is written by . Enjoy! Grand Prix Utrecht featured a Judge Booth, and , and I ran it together. It was really successful, having players nonstop from 10:30 to 18:00. In the rare cases when no one was at the booth, asking to a player passing by if he wanted to try to get a free foil and stuff was enough to get his attention ;). I'd even say that player attendance was close to optimal, as there was always between 1 to 5 players at the same time, which allowed

Hello fellow Judges, The new sheets for the Judge booth are ready to use. So if you would like to run a booth, just contact your Regional Coordinator or me. Thanks to the following judges for submitting questions for the booth. Darcy Alemany Jack Doyle Jason Flatford Josh Stansfield Mike White Nate Lawrence Paul Baranay and special thanks to , not only for helping in the Judge Booth Project, but also for submitting 24(!) new questions. Sounds good, right? But that's not all,

Anniek van der Peijl war part of the judge booth at GP Bochum. Here is her reasoning why she enjoys the judge booth. If you like to share your experiance with the Judge Booth as well as Anniek, feel free to send me an email. Anniek wrotes: "Challenging players (and judges too!) with difficult rules questions is one something I love to do. One of the reasons I became a judge in the first place is because I enjoy explaining the rules to others. So I was very happy to be on judge-booth duty on

Welcome to the Judge Booth Blog. Many of you have heard of or even participated in a judge booth at a GP or other tournament worldwide. If not, let me introduce the concept of the judge booth. It's a place where players can meet us, the Magic Judges. Our goals are public relations: showing that judges are more than the guy who answers your rules questions and wants to get your result entry slip. Education: We can educate players on the rules and policy chances and answer questions they might