Welcome back to Judge of the Week! If you have followed Knowledge Pool Scenarios, you will find his name very familiar! Yes, we are featuring Joe Klophic! 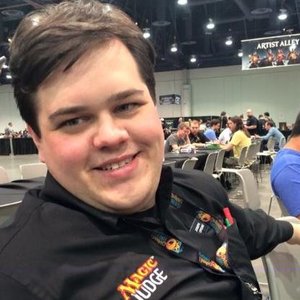 Current Level: 2
Current Location: Seattle, Washington
Date you have been certified as a L1:
26th September 2009
Why did you become a Judge?
Because I loved rules, structure and logistics.
Occupation: Software Developer
Favourite card: Gempalm Polluter
Least favourite card: Deathrite Shaman
Commander General: Progenitus
Favourite non-Magic Game: Bearenpark
Best tournament result: Pro Tour Qualifiers Top 8
Random fact about yourself: I was born in Toronto, Canada. When I moved to Texas at the age of 13, I picked up the nickname Canada Joe. When I started judging, people started calling me Texas Joe. Now I live in Seattle, which is very confusing. Some people insist on calling me Seattle Joe.

Tell us your favourite Judge story.
I moved to Seattle in early 2014, and a couple months after arriving, Cascade Games was planning to run the final Kaijudo Worlds here. I had known Kyle Knudson

, then just a new employee of the company, from judging several other events together. He invited me to judge the tournament, as Cascade wanted good judges who they knew would provide good player experiences, and picking up the Kaijudo rules was pretty easy.

On Sunday of the event, I was the Head Judge of the 85-player Kaijudo Community Sealed Championships, and got to call one of the only two called Kaijudo drafts in the game’s history. Just before that called top-eight draft, I had the unfortunate duty to inform the 8th and 9th place players that they had achieved the nigh-impossible: their first tiebreakers were identical. I’ve never seen this occur before or since, in any tournament with more than 10 players.

Following the end of the festivities, I joined the entire staff at a judge/staff/friends dinner. It was quite the meal, and I just happened to be seated for this meal across from one Emily Blasdell

, who had worked with Cascade Games previously, lived in Seattle, and was available for dinner. Three and a half years later, Emily and I have hit it off quite well, we got married last October. It certainly was quite the weekend.

How has your non-Magic life influenced you being a Judge?
It is no secret that there are a lot of developers in the Judge Program. I think the analytical space that my brain exercises at work is similar to that needed to take apart the rules and policies. This means that the study habits and analytical skills I learned in college and from my job apply readily to everything we do as judges.

My software development career has also been tightly connected to the supply-chain space, so as I learn more about the logistics of moving things around the world, it has given insight to how Magic tournaments are run.

What made you participate in the project “The Knowledge Pool”?
I think The Knowledge Pool has a very high ratio of effort to impact in the Judge Program. I have always followed it, and before I joined, I knew lots of judges who did the same, even if they didn’t participate directly in the scenario threads. I knew that when I joined that I would be able to put interesting questions in front of many judges, and help everyone improve their knowledge.

What are your short term and long term goals and projects that you will be taking on in the future.
On the project front, my goal for 2017 was to have Knowledge Pool not miss a week posting a scenario. We are on track to achieve that.

I am continuing to work on the logistics behind the Deck Checks team on Day 2 of a constructed GP, and also in the midst of writing an article about the new process. The system is neat, but it still has some kinks to work out. Kevin Desprez

wrote an article about the subject that I am working on. What has been your favourite Magic event that you’ve judged?
The Hunter Burton Memorial Open, every year. Hunter was a good friend of mine and a huge part of the Dallas/Forth Worth Magic community. This event allows his family and all Magic players to give back, and has an atmosphere like no other.

What is the one breakfast tip that you would recommend to Judges judging an event in the morning?
Eat protein, and consume whatever caffeine you need. If doing this requires some advanced planning, do it.

I rent Airbnbs at many GPs, and that means I usually have access to a kitchen. I make bacon and eggs for breakfast every morning, and have the Coke Zero I need to function ready to go. Protein will keep you going for longer when you have to get out and judge, possibly without a break for a while.

Who are your role models in the Judge Program? What are their certain qualities that drew you to them? The circa 2010 Florida Judges. I know there have been a lot of tales and lore about these folks. I have always appreciated their work ethics, and the balance of that to their desire to have fun. When you work really hard and put out a product that is the highest standard, you have room for big personalities to shine.

I think the crux of it is “never accept ‘good enough’ as an answer.” We can always be better judges, put on better tournaments, help players have more fun, and most importantly never limit our own enjoyment.

What is your favourite non-Magic hobby?
I’ll choose to exclude other tabletop games, and say Sports. I really enjoy numbers and statistics, so baseball is really big for me. I play adult Hockey, and am a huge fan of Dallas-based sports teams. Go Cowboys/Rangers/Stars/Mavs!

The answer to the last Two Truths and a Lie...
Monica Gonzalez did not act as a Game of Thrones extra.